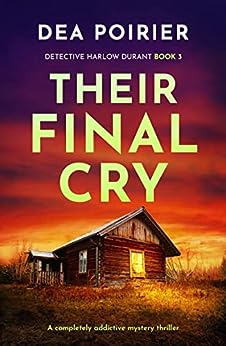 As the sheet was pulled away, Harlow started to get a picture of her victim. Looking down at her alabaster skin, flowing blonde hair and striking cheekbones, it was not hard to see why she was known as the sweetheart of this town. But as Harlow’s eyes scanned down to the purple bruising around her neck, it was clear that someone wanted her dead.

When the body of sixteen-year-old Mazie Winters is discovered on the site of an abandoned farm, the small and tight-knit community of New Paltz in upstate New York is rocked to its core and Detective Harlow Durant is called in immediately to investigate.

Harlow’s partner Lucas Park is already working at Ackert Farm on a cold case, identifying human remains found in a cellar. Looking out at the desolate farmland, Harlow can’t help but think that dumping Mazie’s body on the site of an active crime scene is a warning: leave the remains in the past or more innocent lives will be lost.

Searching old farm records and interviewing previous owners, Harlow discovers that no one ever stayed long: the ground appeared to be cursed and owners soon moved on. The only shred of evidence is of teens heading into the vast network of woods to hear the supposed cries of women, presumed to be the ghosts of the past. But were those screams real?

As Harlow pieces together a picture of Mazie: a loving daughter of the local pastor who spent her weekends singing in the church choir, she is called to an abandoned outhouse hidden in the woods. Forcing open the door, she is shocked to find the remains of two women. But the case soon becomes personal as Lucas recognises the necklace found on one of the bodies.

Could the remains be linked to the tragic disappearance of Lucas’s mother decades before? And when another teenager vanishes, Harlow senses history repeating itself. With a killer at large, Harlow knows that time is running out to catch the killer and bring justice to Lucas’s family. But how far will the killer go to cover up their darkest crime?